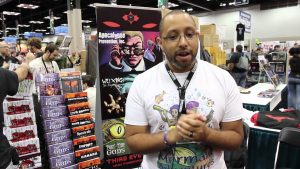 Eloy Lasanta is the head of 3rd Eye Games which publishes Part-Time Gods, Ninja Crusade, The Pip System, Apocalypse Prevention Inc, Sins of the Father, the AMP superhero series of games, and Storm Battalion. His games range from Kid friendly to story games to much more traditional games.

Hey Folks. Time to reveal some of the D&D offerings we have this year at the QCC.

First off we have The Red War epic lined up to happen on Saturday Afternoon. That’s right. Another epic and a dozy. Here’s the description:

DDEP 00-01 The Red War – D&D AL Epic: The Cults of Elemental Evil brought incredible destruction down on the city of Mulmaster. In its hour of need, Mulmaster received aid from an unlikely source – the Mageocracy of Thay, ruled by the lich Szazz Tam. With Mulmaster moving ever closer to Thay’s orbit and strife brewing within the Factions for action, the hour is ripe for conflict. A four-hour Epic adventure for characters level 1-20.

You can secure your spot for the epic through the kickstarter via the Epic Level. The Red War

Last, and by no means least, we have AL Admin Lysa Chen joining us this year if you didn’t hear. She’ll be running some games and will be on a panel. Probably something having to do with building your community around D&D

If you love D&D and want to play AL content all weekend, or just for a few slots, the Queen City Conquest is the place to do it. The passes won’t be cheaper than they are right now so get them through the kickstarter.

Andi Fox is co-host of She’s a Super Geek (the actual play highlighting women as GMs), Isla on the Redemption Podcast, and currently DMing the Wednesday Evening Podcast All-Stars in Avanti: Glitter & Blood. Find her on twitter @TheCraftyDM. And don’t ask her about her conspiracy of porgs.

Andi will be running games of Dungeons and Dragons 5e set in her home-brewed world Avanti. Bring high magic imaginations and get ready for some masquerade drama. Pre-gens provided. 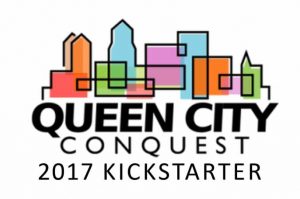 We have some new levels for you for the Queen City Conquest. We felt you weren’t happy with what there was so we expanded our offerings.

Attend the QCC 2018 with a 3-day Pass and guarantee your spot in the D&D Epic THE RED WAR! You’ll receive one 3-day Pass to the QCC, along with special backer-only perks and you’ll already have your spot reserved for the D&D Epic. All items to be picked up at QCC 2018 at Registration.

You receive everything from the 3 Day Pass level plus you get your QCC T-Shirt, Glass, and die.  Add-on on $3 for a XL or larger shirt and $5 for a 4X shirt.  All items to be picked up at QCC 2018 at Registration.

You receive everything from the 3 Day Pass level plus you get access to the Break Room where you can go to take a break, get a bottle of water, grab some almonds, a granola bar, some candy or other snacks and just take a break. You can also store your stuff there too. All items to be picked up at QCC 2018 at Registration.

You’ll receive one 3-day pass to QCC and a round table you can use to play games or hang out at during the length of the convention. Prices after the Kickstarter will go up, so get in at this Early Bird rate! All items to be picked up at QCC 2018 at Registration.

You get to have dinner and a game with Eloy Lasanta on Saturday evening. This includes a 3-day pass, T-shirt, 2 dice, glass, and any other backer-only perks. For dinner we pay for the first $260 of the bill, you and the other attendees of dinner pay for the rest. All items to be picked up at QCC 2018 at Registration.

You get to have dinner and a game with Stacy Dellorfano on Friday evening. This includes a 3-day pass, T-shirt, 2 dice, glass, and any other backer-only perks. For dinner we pay for the first $260 of the bill, you and the other attendees of dinner pay for the rest. All items to be picked up at QCC 2018 at Registration.

You’ll get access to the registration system for events a week before the regular badge holders get access. The VIGs get first crack but after that it’s all game access for you.

The Queen City Conquest is Western New York’s premier gaming convention from Lake Effect Gaming and Events. In its seventh year, Queen City Conquest or QCC, is a three-day event focused on the hobby of board, card, and role-playing-games as well as video games and live-interaction events.

Stacy Dellorfano is the founder of Contessa – a gaming convention within a convention that promotes and encourages diversity in gaming. Stacey also worked on the redesign of Swords & Wizardry for their 3rd printing and as well as adventures for Swords & Wizardry and Lamentations of the Flame Princess.

Eloy Lasanta is an ENnie Award winning game designer, has created many of his own worlds, such as Part-Time Gods, The Ninja Crusade and AMP: Year One. In addition, he has created several custom systems to power each game, like the newly released Pip System Corebook. He has a philosophy of using games to bring people and families together, leading to the combination of family-style and traditional games available from his company, Third Eye Games

Sunday, September will be Queen City Conquest Family Day. Events will include many child-friendly activities. A four pack of tickets is only $40.

Our open board games library will be available all weekend so you can try before you buy from our vendors.

These are just a few of the events, guests, and personalities that we will have at the convention. We are also hoping to add more as September approaches.

Tickets start at $33 for a single day pass, with 3 day passes for $50. This year we also have a special family day pass available for Sunday, September 9, for $40 for a family of 4.

Here’s some games you might want to play at the QCC by some of our gaming guests.

The Queen distrusts the King’s Time Traveler advisers and has dispatched her Musketeers to protect the Crown and people of France. Engage in palace intrigue and swashbuckling adventure in this mashed up world. A Fate Accelerated game.
Sunday at 1:00 PM
Two slots open of this game as of this writing

One Child’s Heart by Camdon Wright

One Child’s Heart explores the participant’s ability to create human connection through roleplay. Players take on the role of professionals that work with children. They are given the chance to travel into the memories of a young person to help them grow emotionally and reframe those memories.
Friday at 1:00 PM
Three slots open as of this writing

One of the first public playtests of the MWS gaming system by ENnie award winning author John Arcadian of Gnome Stew. This playtest will use the “detailed” version of MWS, have a quick character creation, and will be a “serial numbers shaved off” love letter to the Voltron series.
Sunday at 9:00 AM
4 slots open as of this writing

Hey Folks. It’s time for the Black Friday Sale for the QCC. We’re opening up our store for the lowest prices for 3 day badges and our VIP Badges.

Our VIP Badges are $100 and include one 3 day badge, your T-Shirt, the Thursday Evening Get Together with our special guests, access to our lounge where we’ll have coffee, snacks, fruit, a place to store your things and get away from the insanity of the convention to take a breather, and 2 Queen City Conquest dice

You can pick up your badges by following this link

With that said, we want you to be aware that the convention has moved to July 12th – July 14th and will be at Daemen College this year. It’s allowed us to reduce our costs and provide more value to you. We can’t wait to see you in July and thank you for supporting the convention and being a part of our community.

Hey folks. Just wanted to let you know we have a new location this year and new dates.

We will be at Daemen College. The facility is quite lovely and has allowed us to reduce some of our cost which we’re passing on to you.

The convention is going to be from July 12th to the 14th.

In the coming days we’ll be having more details for you and we want you to know we won’t be having a kickstarter but we will be having a 30 day sale and if we sell enough badges during the sale we’ll be able to open up some interesting events and possibly some more guests for this years convention. We’ll be having our sale starting in February and rolling into March.

We have a stocking stuffer game night at Iron Buffalo on Thursday, December 20th from 7 pm till close. We encourage you to come out, drink some coffee or hot coco, and play your favorite games that could fit in a stocking.

We also have the following events coming up: