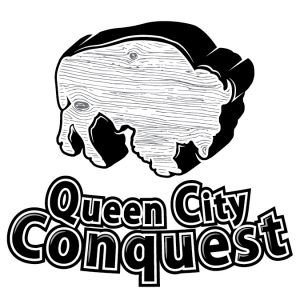 The Queen City Conquest is Western New York’s premier gaming conventions. For the past five years we’ve been bringing the best three days of gaming to the region through epic events, interesting guests, and by providing the time and space for all of you wonderful gamers to get together with some of your favorite people from in and out of town.

A few highlights from the past have been the D&D epic which ran over twenty tables in 2016 and 2017, having Sean Patrick Fannon run a table of 16 people in an epic Shaintar game in 2014, and our charity raffles and auctions which have raised thousands of dollars for Child’s Play.

This convention has been held in the Buffalo Niagara convention center every September it has existed and this coming year is no different, our dates being September 7th, 8th, and 9th. This year the QCC is now owned by Lake Effect Gaming who are comprised of some familiar faces, Cindy Moore, Effie Matteson, Jerry Meyer’s, Sean Gilgore & Chris Sniezak. We look forward to seeing what the team does to make the Queen City Conquest even better than it’s ever been. Now lets meet the team.

A Bit About Me

I have been gaming for…well…half my life. Dungeons & Dragons is my passion, so much so that I concentrated in Medieval History as an Undergraduate. I also enjoy board games from time to time, however, I like so many it would fill up more than you’d want to read if I listed them all. I watch nearly all the superhero movies and TV series, and plan to continue that tradition. My all-time favorite TV series is Buffy the Vampire Slayer!I have worked alongside Mark Knapik as QCC Co-Director for 3 years and have held several volunteer positions in the gaming industry. I am currently coordinator for the Hillsfar region, which is part of Baldman Games’ Convention Created Content for D&D Adventurers League. I was the D&D Adventures League Regional Coordinator for the Northeast for 3 years. I am also a writer in the RPG industry with several projects including four adventures for D&D Adventures League and an adventure for the first Hillsfar trilogy to my credit.

I have a Master’s degree in Library Science and work as an independent contractor digitizing historical documents and artifacts for a local library. I also work a full time job that pays the bills. I live in Western New York with my husband (who is a saint), two children, and a little white fluffy bundle of unconditional love.

Favorite Games And Geek Things
Dungeons & Dragons and Buffy the Vampire Slayer.
Where You Can Reach Me
[email protected]

A Bit About Me
I’ve been playing D&D since the 5e playtest. I walked in to Seeley and Kane’s nervous about my first game and met some of my soon-to-be best friends. I quickly became involved in the community as a store coordinator, volunteering at various conventions, and collecting all the pretty dice.
Three years ago I had never been to a convention. In the time since I have been to QCC three times, Origins twice, PAXEast, GenCon, UBCon, and CarnageCon. You could say I am hooked. My favorite part of all the conventions has been my time spent on the vendor floor chatting with game designers and writers. Okay, and shopping.
I hate shoes, Monopoly*, and deck building games.
I love the color pink (all the pink dice!) , role play games, binge on Netflix and YA books, play with sticks and string, and raised a small army by myself.
I have worked on a dairy farm, assembled computer cables and mass mailings, been an advertising researcher, and now play with old things as a digital archivist. I also have a small business on on Etsy, making stickers.
*Monopoly. I cannot stress enough just how much I hate Monopoly. Every copy in existence should be burned with the heat of a thousand white hot suns.

Where You Can Reach Me
[email protected]

What I Do
As the marketing director I work with business and individuals to gain advertisers and sponsorship for the Queen City Conquest. I make sure their products and message are known by our community. I also act as the Guest Liason for both our guest of honor and our attendees. Every now and then I am known for facilitating a game of Dead of Winter, Cutthroat Caverns, or Fiasco.
A Bit About Me
Favorite Games And Geek Things
RPG’s – Dungeon World, Vampire the Masquerade, Top Secret, The Hood, World Wide Wrestling
Board Games – Dead of Winter, Scythe, Slaughter Ball, Cutthroat Caverns, Love Letter, Nevermore, Chess
Geek things –  WWE, Playstation, Roger Zelany’s Nine Princes of Amber, The Dresden Files, Game of Thrones
Where You Can Reach Me
[email protected]

A Bit About Me

Favorite Games and Geek Things
Dungeon World and most Powered by the Apocalypse Games. Indy games of all sorts. D&D a lot. Games period really. After that it’s The Flash and Arrow as my must watch TV and any time a new Marvel series comes out on Netflix. I’m also a huge fan of Anime and to be more specific I like the fighters like One Piece and Yu Yu Hakasho, and some of the more epic/philosophical stories like Full Metal Alchemist or Death Note.

Where You Can Reach Me
[email protected]